March 2020: A hearing at a Bavarian courthouse on Monday over the asylum application of a lesbian woman from Uganda was thrown out after she was granted her refugee status by federal authorities.

The judge decided that the 41-year-old asylum-seeker, who faces violence and prosecution in her home country, will not be deported.

The Bavarian court did not need to make a decision after the Federal Office for Migration and Refugees admitted that the woman qualified for refugee status at the trial.

LGBT+ people in Uganda can face life imprisonment for engaging in sexual relations, as well as discrimination in private and public spheres. An October 2019 proposed law — referred to as the “Kill the Gays” bill — floated the introduction of the death penalty for LGBT+ people. The legislation was later voided.

Case ‘not a precedent’

Advocacy groups said that the case could act as a precedent for LGBT+ refugees in Germany and Europe. … However, the judge clarified that it was an “individual case” and did not mark a precedent for Ugandan or LGBT+ asylum-seekers.

A 20-year-old Ugandan woman is at risk of deportation after attempting to seek asylum in the United States.

According to a recent story by Rolling Stone, the woman, identified only as Margaret, traveled from Uganda after coming out as a lesbian. As a result of her being public about her sexuality, she was “raped and repeatedly beaten.” Margaret reached the Juárez, Mexico–El Paso, Texas border after a lengthy and dangerous trek spanning several months.

Although Margaret didn’t have her documentation — or any personal belongings, since they all had been stolen while she was on the Mexican side of the border — she successfully was able to enter the U.S. last month. However, on Wednesday she was told devastating news.

“U.S. officials had determined that, despite being a lesbian from a country in which it is illegal to be one, and despite having already suffered beatings and a rape, Margaret had no ‘credible fear’ or any way of knowing what would happen if she were sent back,” Rolling Stone reports.

An appeal has been filed and Margaret may receive an immigration judge’s ruling as early as next week.

Refugee lesbians at the mercy of the German bureaucracy

[Diane] Namusoke, 48, and [Success] Johnson, 27, are two lesbian women from Uganda and Nigeria respectively, who have come to Germany in search of asylum. They’ve explained — first to the police officers who picked them up, then to the aid workers at the refugee centers where they were transferred, and then at their asylum application interview at the Federal Office for Migration and Refugees (BAMF) — that they feared for their lives in their home countries. That as a lesbian woman, nowhere was safe. And now they’re in acute danger of being deported back to the places they have desperately been trying to escape. 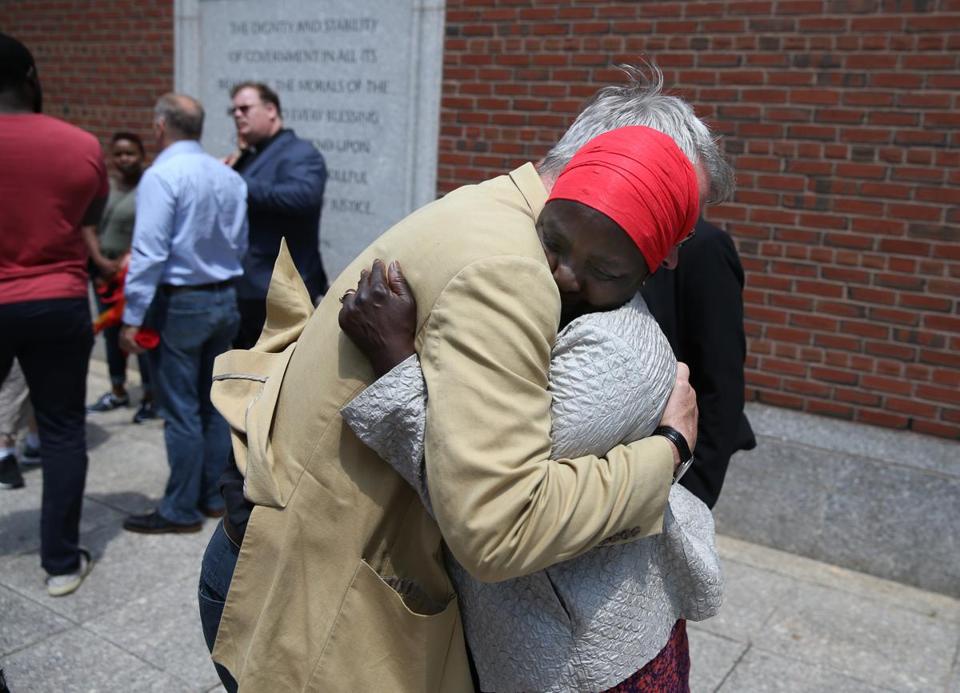 A Massachusetts federal court judge ruled late Thursday that he has no jurisdiction to delay deportation proceedings of a gay Ugandan woman who has said she believes she could be persecuted, and even killed, if she returns to Uganda, where homosexuality is illegal and punishable by life in prison.

Update: Lesbian refugee says she’s relieved to still be in Canada, at least for now

“I’m happy. So happy,” Angela says, two days after authorities halted her deportation at the last minute.
The 21-year-old lesbian was scheduled to be deported on Jan 18, 2017, after Canada’s Immigration and Refugee Board denied her request for asylum here.
Just 24 hours before she was scheduled to be deported, Angela was granted a stay of removal, allowing her to remain in Canada and appeal her case. “When I got the news I was relieved,” she says. “I wasn’t scared anymore of going back home.”