Fulfilling her heart’s desire to create a family was a personal odyssey for Natasha King, 46, of Saskatchewan, Canada.

Continue reading at: This Lesbian Mom Shares An Amazing Story About Her Journey To Creating Her Family | The Huffington Post (Source)

“Lethal threat for the whole of humankind” – ongoing persecution in Russia 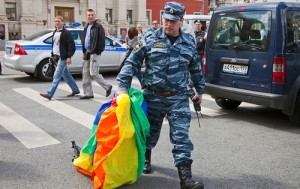 News for Russian lesbians gets grimmer as new legislation flags the possibility of being fined or arrested for merely coming out on the grounds of homosexuality posing a “lethal threat for the whole of humankind”.  The legislation is matched by public opinion reportedly showing an increase in the percentage of the population who believe that lesbians and gay men should be “isolated from the population”, with one fifth purportedly supporting the “liquidation” of the LGBTI  community. Following previous anti lesbian and gay crackdowns, including the banning of “anti gay propaganda” in 2013, the proposed legislation would fine Russian lesbians and gay men for publicly declaring their sexuality, with proposed incarceration for making the “declaration” in a school, cultural institution or public building.
The situation for lesbians in many parts of the world remains dire, with legal sanctions complementing social sanctions including horrific rates of corrective rape, as reported by Victoria A. Brownworth.

Profound thanks to Lisa for compiling the vast majority of this edition of Lesbians in the News.

If you have any other stories, please add them in the comments or email them to me at liz@listening2lesbians.com.

In an example of an appalling hate crime in 2012, two two young lesbians went on a date but were viciously attacked. Mollie Olgin was killed and Mary Kristene Chapa was left for dead.

Their attacker was arrested in 2014 but was not charged with a hate crime, despite sufficient evidence to justify it.

Despite the horror of the crime, Mary Kristene Chapa’s medical fund has only raised $12,882, compared to the over $800,000 raised for Memories Pizza, the pizzeria that declined to cater same sex weddings.

Horrific anti lesbian crime occur routinely and they are not reported. When they are, this is the level of interest they garner.

This is lesbophobia and silencing writ large.

Please read more about Mollie and Mary in Victoria A Brownworth’s piece and please donate to help Mary Kristene Chapa with her medical expenses.

Aderonke Apata had appealed to the High Court in the UK when her bid for asylum for sexuality-based persecution was rejected. The UK government argued that she was not a lesbian on the grounds that she had previously been in a heterosexual relationship in her home country of Nigeria, and that she had previously appeared more feminine. Her claim that her ex girlfriend, brother and son were killed and her submissions of sex tapes did not affect the outcome. The Home Office representative declared “The “You can’t be a heterosexual one day and a lesbian the next day. Just as you can’t change your race.”

The judge decided that she was not a lesbian and that she “played the system”, despite a very real fear of persecution if she returns to Nigeria, having been internationally publicised as a lesbian, where lesbians are punished by law and through (increasingly violent) homophobia.

We now have the bizarre position in the UK where you are able to identify as a woman and legally change your recorded sex on public records, if you meet the criteria, but you are not able to identify your own sexuality – clear proof of identifying and living/acting AS A LESBIAN  is insufficient.

In the words of Antilla Dean:

So if you are male, you can identify as a woman and that’s cool.

If you are, actually, a lesbian, and identify as one, and dress as one, and love another female as a female, you are gaming the system.

A campaign in support of Aderonke Apata has been launched by the Proud2Be Project, whose patron she is.

Li Maizi, formally known as Li Tingting, was arrested for “causing arguments in the street” in the leadup to International Women’s Day. Her girlfriend, pictured with her above, is calling for help through All Out:

My name is Xiao La, and I live in China. Two weeks ago, Maizi was organizing a peaceful protest with four friends to denounce harassment at work. They were making pro-equality stickers and planning to hand them out. And just for that, Chinese authorities put my girlfriend in jail.

My birthday is today. Maizi and I had planned to spend the day together doing romantic things. My birthday wish is to have Maizi back. Alone, I won’t be heard. But if thousands around the world join us, the global outcry could get her out of jail.

Can you sign my petition to help free my girlfriend and her friends? go.allout.org/en/a/freethefive/

Maizi and I were taken by the police together, but I was freed the following day. Authorities can now hold her for up to 37 days before deciding whether to even charge her. The authorities confiscated her computer and her phone. The worst part? It happened the night before International Women’s Day.

News articles on the detention:

Keynote speaker Dr Ruth McNair (from the Australian Lesbian Medical Association) argued that “a conference focusing specifically on women’s health in the community is needed in part because of a history of lesbian, bisexual and queer women’s health being overlooked in funding, policy and LGBTI community services.”

The ALICE study on Alcohol and Lesbian/bisexual women: Insights into Culture and Emotions reported high levels of depression and anxiety, with social stressors (oppression, discrimination and homophobia) closely linked to depression and anxiety rates, drinking levels and self harm and suicidal thoughts.

Other social and health issue stories:

Corrective Rape: “I became their playground” – a short film exploration

“Corrective rape, the attempt to cure lesbians of their homosexuality, is escalating in severity in South Africa. This film explores the phenomenon through the story of a gay single mother from near Johannesburg.  Busisiwe’s five children are all the offspring of corrective rape. As a lesbian, she was raped in order to be ‘cured’ of her homosexuality. Despite that they’re a product of the hate crime, her relationship with her children is not destroyed: “I only want them to succeed in life, to have the things I didn’t.” In Gauteng near Johannesburg, crime and violence are on the increase and life is tough. With the courage found in her children, Busisiwe helps to educate the young about being safe on the streets.”

Odorkor Lesbians in Hiding after vicious attacks, as violence against lesbians continues in Accra, Ghana with ongoing police inaction. The violence includes torture by local youth.

Attacks in Swaziland are on the rise with a young lesbian killed in Nhlangano, Swaziland in a horrific hate crime.

Representation Matters – Julie Enszer, Poet, scholar and curator of the Lesbian Poetry Archive Speaks on the stories we tell and why they matter

Anniversary of a lesbian murder – Kitty Genovese died 51 years ago in a vicious hate crime against women.

“Jean was a force in the lives of all who knew her. A visionary, she anticipated many of the political and economic shifts the country has endured over the past several decades. Undaunted by the implications of her insights, she dedicated herself tirelessly—and with uncommon skill, humor, and compassion—to the cause of social justice. She was a friend, mentor, colleague, and inspiration to us, and to countless people and organizations.”

In lieu of flowers, donations may be sent to The Highlander Center, highlandercenter.org or to the Boston Women’s Fund, bostonwomensfund.org .

Lesbian Couple Denied services – Community rallies after Wedding Video denied The big question is – would the community rally if what was demanded was not quite so conforming with standard community values??

Tasmania, Australia: Schools to be given option to reject students – will sexuality be targeted?

California’s LGBT Caucus files complaint against OC lawyer who wants to “kill the gays”. Unfortunately, it seems that the petition is hard to stop…

NSFW: footage of homophobia at previous marches in the 90s.

US: Cross Burned on lesbians’ Lawn

US: In 16 states, same-sex couples can legally marry and then later that day get fired from their job for doing so. Federa; Panel Discusses LGB protections.

Homophobia in the US – what’s it like for LGBT refugees?

Maryland US – A bill that on fertility treatment access for married lesbians progresses and will be voted on this week.

US: Lesbian sacked for starting a family

Please send me information on any lesbian news I have missed at liz@listening2lesbians.com.