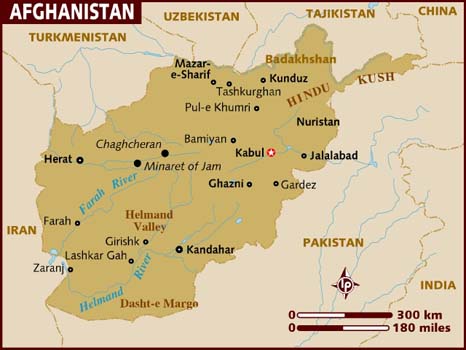 FIFA on Saturday barred the president of Afghanistan’s soccer association from the sport for life, months after reports emerged that he had sexually assaulted players and had threatened them when they went public with their accusations.

Women who rebuffed his advances were labeled lesbians and expelled from the team, according to eight former players who said that it had happened to them. Those who went public said they faced intimidation.

The freedoms of individuals and expression won a clear victory yesterday, with the decision of the judge of summary of Beirut, Marie-Christine Eid, to reject the appeal presented the day before, Tuesday, January 29, 2019, by a handful of lawyers to ban the broadcast of the program Ana Heyk (“I am like”) which gives the floor to lesbians. A show by star presenter Neshan Der Haroutiounian on the Al-Jadeed TV channel, which lawyers Mohammad Ziad Jaafil, Michel Fallah, Lina Sahmarani, Mohammad Assad Safsouf and trainee lawyer Omar Chbaro said, “promotes deviant social cases and highlights them as if they were examples to follow for the younger generation. This goes against the laws in force and more particularly the penal code, and undermines the moral values of the Lebanese society “.

Ghana Bar Association President Anthony Forson Jnr. could find himself in the same sort of soup as a second lady has come forward to tell her story of alleged rape perpetrated by the GBA Prez. Kuukuwa Andam, the Canadian based Ghanaian lawyer who reported the first alleged rape, received a message anonymously from another lady who alleges being raped by Forson. According to her, ‘Tony’ also raped her, and because he knew she was a lesbian he blackmailed her with that knowledge to keep her mouth shut.

“They were pushing and forcing the girls. Coercing them.”

Popal also accused [President of the Afghan Football Federation (AFF) Keramuudin] Karim himself of beating a girl with a snooker cue and calling players lesbians to stop them speaking out.

“If they spoke out, no one would listen to them because being accused of being lesbian or gay in Afghanistan is a topic you don’t speak about and puts you and your family in a lot of danger,” she said.

Discrimination and violence against lesbians, because of our sexual orientation and because of our female bodies, is rampant in today’s world.  From no-platforming to corrective rape, to job discrimination, to murder, we are constantly aware of the silencing of our community and the attempts to control and harm our bodies, because we are lesbians.  Because of this, we have been deeply disturbed to learn that there has been a rash of post deletions and bans by Facebook for women that post status updates with the word “dyke” in their posts.   Many of us are on our second or third ban. Some of us got banned again and again, within mere minutes of logging back on for the first time after a recent ban had been lifted. We have had reports that these consecutive bans included posts that lesbians had posted on their own walls days to weeks in the past.

“On other occasions, people may reclaim offensive terms that were used to attack them. When someone uses an offensive term in a self-referential way, it can feel very different from when the same term is used to attack them. For example, the use of the word “dyke” may be considered hate speech when directed as an attack on someone on the basis of the fact that they are gay. However, if someone posted a photo of themselves with #dyke, it would be allowed. Another example is the word “faggot.” This word could be considered hate speech when directed at a person, but, in Italy, among other places, “frocio” (“faggot”) is used by LGBT activists to denounce homophobia and reclaim the word. In these cases, removing the content would mean restricting someone’s ability to express themselves on Facebook.”

We are deeply concerned that lesbians and women showing support for our community, are being banned for expressing their love and respect for our culture.  We are also deeply concerned that women are being silenced when they express their views on what it means to be a dyke.  This is a conversation for lesbians only and should not be controlled or manipulated by anyone outside of our community.

We are asking for everyone’s support in calling on Facebook to end their discriminatory practice of banning women for using the word “dyke” in a self-referential manner and/or as a positive expression of our culture.  We also reject the idea that we must use a hashtag in front of our identity in order to not get banned.  We demand they follow their own stated policy, and allow us to use our own word in order to avoid restricting our ability to express ourselves on Facebook.

We are also calling on Facebook to do an investigation into the practices of their Community Operations Team, the content reviewers responsible for answering reports, scanning user posts, and carrying out bans and deletions.  We demand that Facebook determine if any of their employees responsible for judging user content are showing a bias against women and lesbians.  We call on Facebook to terminate the employment of any individual that has intentionally targeted women and lesbians for their beliefs and/or because they hate women and lesbians.  We believe this investigation should also be conducted with regards to other minority groups as well.

Finally, we are calling on Facebook to fix their hate speech algorithms to recognize the importance of the word “dyke” in the lesbian culture and to strengthen their approach to recognizing and addressing actual hate speech against lesbians.  While we are just one minority group affected by these policies, we feel other minority groups are similarly affected.  We ask for your support in settling this dispute with Facebook.

Thank you for your support!

This petition will be delivered to:

ADD YOUR NAME TO THE PETITION Facebook: Stop Discriminating Against Lesbians-Petition Change.org

Since we posted in fury at being unable to have a username @listening2lesbians for our Facebook page, we discovered that many words are banned.

Lesbian is the only group in the LGBTIQA community who is point blank banned.

This time we screen capped it all for clarity and proof.

Lesbian is a banned word:

But all of these other labels are allowed:

The word gay is fine.

The word sexual itself  is banned 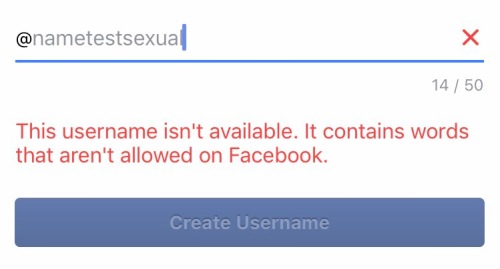 But, bi, biwomen,and bicurious are allowed:

Trans, transman, transmen, transwoman and transwomen are all permitted:

We wondered about words used both as insults and identity and dyke is allowed but faggot is banned. 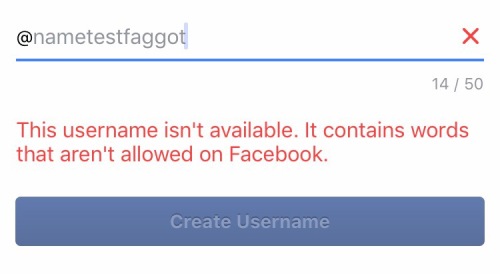 Tellingly, hetero is permitted but homo itself is not: 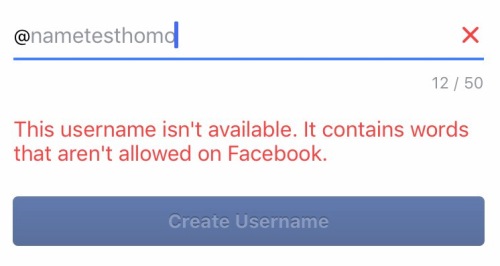 So there you have it. Lesbian is banned when others are not. Only homo and faggot were also banned.

Does this mean Facebook thinks the word lesbian is itself an insult or is it a case of deliberate discrimination and silencing?

Side note: we put our username in capitals and used an lowercase l for the I to get our username so it is @llstening2lesblans but it looks ok in uppercase as @LISTENlNG2LESBlANS. We couldn’t bring ourselves to drop the word lesbian.

We were keenly aware of the irony of listening also being banned in Facebook page usernames but in the few days since we originally posted this seems to have changed as per the pictures below. 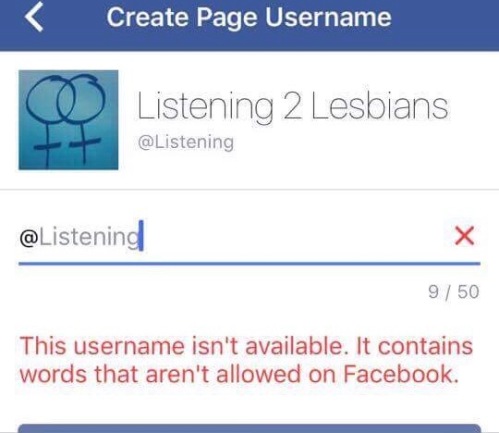