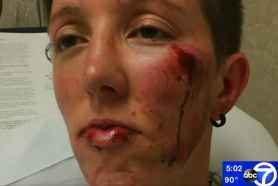 Kimberly Page is speaking out publicly about a violent attack as police search for suspects. Page said that she and her girlfriend were out late with friends in a town on Long Island on July 7.

At around 3:30 a.m., Page and her girlfriend were alone when a group of men approached them and taunted them.

They “started saying obscene things to my girlfriend and I,” Page said. “It originated by him asking her if she wanted a real [expletive] and why is she with this [slur].” She said that they tried to ignore the men, but then the men got angry.

The man slapped Page’s girlfriend and then punched Page.

One response to “U.S: Lesbian couple brutally attacked by group of men”