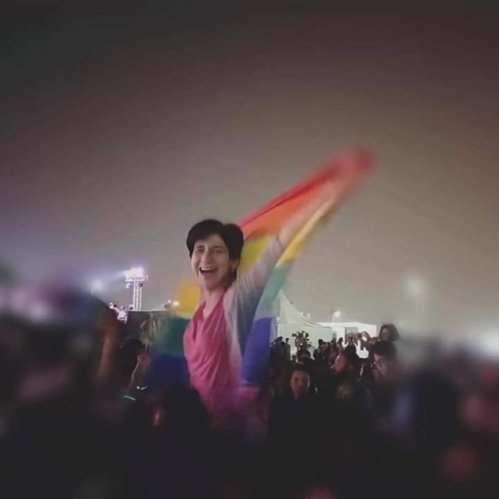 CAIRO — When the openly gay frontman of a hugely popular Lebanese pop group strutted onto the stage of a Cairo summer festival in 2017, rainbow flags lifted in the air, and something sparked inside Sarah Hegazi.

As a lesbian in a country where homosexuality is taboo, and gay people are routinely persecuted by the authorities, here was a glimmer of freedom. Beaming with joy, she raised both hands in the air and hoisted her own rainbow flag aloft. A friend captured the moment on camera.

It was the start of her undoing. …

Although homosexuality is not technically illegal in Egypt, gay people are subjected to deep-rooted societal prejudices and are frequently prosecuted by the police under laws that criminalize “debauchery.” Undercover police investigators use aliases to roam popular dating apps to entrap and arrest gay men. Others are arrested from cafes or the streets on the basis of their appearance.

Concerts are also a focus of law enforcement.

Even before she attended the event headlined by the Lebanese band Mashrou’ Leila in 2017, Ms. Hegazi’s life had undergone dramatic shifts. She had shed the head-covering veil that she had once worn, and had begun to embrace her identity as a gay woman.

At the concert she felt liberated, she told the German broadcaster Deutsche Welle, because “I was declaring myself in a society that hates all that is different from the norm.”

Ahmed Alaa, a law student who also waved a flag, later called the experience “the most beautiful five minutes of my life.”

But once the photo of her waving a flag went viral on social media, Ms. Hegazi was inundated by hate-filled comments, including death threats, said Mostafa Fouad, her lawyer and friend.

Popular television hosts amplified the mood: “How can the homosexual’s flag be raised over Egypt’s pure land?” said one. Another, Ahmed Moussa, denounced “this debauchery, this shame, this crime.”

Days later, armed security officials arrived at Ms. Hegazi’s home and took her to a detention center run by the National Security Agency, a feared arm of Mr. el-Sisi’s security apparatus. Officers questioned her religious beliefs and asked if she was a virgin.

She was blindfolded and taken to a foul-smelling interrogation room where she could hear people groaning with pain. A piece of cloth was stuffed into her mouth. She was tortured with electric shocks, she later said in interviews.