Lesbians ‘told they did not need cervical screening‘

Women who have sex with women are often wrongly told they do not need a cervical screening test, say LGBT groups.

This results in half of all eligible lesbian and bisexual women never having had a smear test, they said.

The human papilloma virus (HPV), which causes most cervical cancers, can be transmitted through lesbian sex.

Cervical cancer charities say all women, no matter their orientation, should have regular cervical screening.

LGBT groups say women regularly face barriers to accessing healthcare and can have poor experiences when they do.

The charity Jo‘s Cervical Cancer Trust says all women, regardless of their sexual orientation, should have regular cervical screening.

“As HPV can be transmitted through skin-to-skin in the genital area, gay women [sic] are equally at risk of contracting HPV and experiencing abnormal cervical changes and, thus, should always attend when invited for cervical screening.”

In a study of attitudes to cervical screening among gay [sic] and bisexual women in the north-west of England, carried out by the University of Salford in 2011, 37% of women questioned said they had been told they did not require a cervical screening test because of their sexual orientation.

The man refused to speak when confronted by homeowners in the West Sacramento neighborhood about his leaflet, titled ‘The key to the mystery of estrogen and cancer.’ 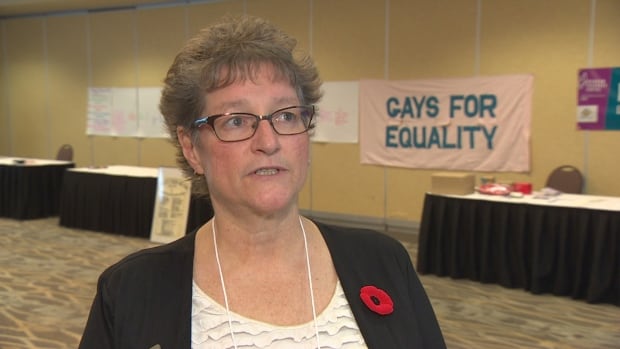 Bishop recalled the story of a woman who lost her spouse of 25 years.

The woman didn’t tell her friends in her knitting group that her partner was a female until the shooting at Pulse nightclub happened in Orlando in 2016, Bishop said.

“There’s an assumption that if you get old and you’re widowed, then you’ve lost a man,” Bishop said, explaining why the woman didn’t reveal her partner’s identity sooner.

“Many people talked about how health-care practitioners would not look them in the eye, seemed flustered by them or just generally communicated through body language that they were uncomfortable,” McPhail said.

‘I Was Fighting Breast Cancer as an Underinsured Woman (and lesbian), and I Couldn’t Get the Care I Needed to Live’

Once she was diagnosed, Tripplett, a real estate agent, says she and her girlfriend called medical offices endlessly, trying to find the right words to say in order to get her the help she needed. When she heard, “We don’t take your insurance,” she’d say, “I’m sure somebody else there does.” When she heard, “Your girlfriend can’t come in the room,” she’d say, “Oh, good thing she’s my best friend, so now she can come in.

Continue reading at: ‘I Was Fighting Breast Cancer as an Underinsured Woman, and I Couldn’t Get the Care I Needed to Live’ | Glamour (Source)