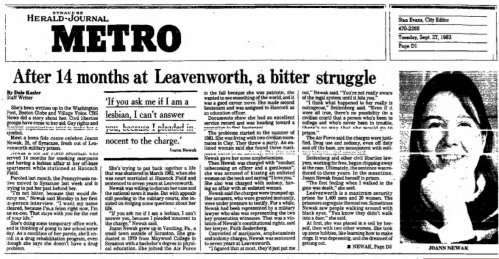 Joann Newak had been sentenced to seven years hard labor. She was 23 years old, just coming to terms with her attraction to women. It landed her in maximum security military prison. “The very first lesbian relationship I had was with the partner that testified against me at my court marshall,” she says. “It’s like screwing around for the first time and getting pregnant. That was my first experience.”

Newak is among an estimated 100,000 LGBTQ former service members that were discharged without an “honorable” distinction. When “Don’t Ask, Don’t Tell,” (DADT) the military policy banning service members from serving openly, was repealed, their discharges were never upgraded. More than 30 years later, she considers, for the first time, that she may be owed an honorable discharge. Her attorney, Elizabeth Kristen, says they are going to pursue legal options to obtain one.

Like Loading...
This entry was posted in Interviews, News and tagged Discrimination, homophobia, Joann Newak, Lesbian history, Lesbians in the military, Lesbians in the U.S., Lesbophobia, personal stories. Bookmark the permalink.