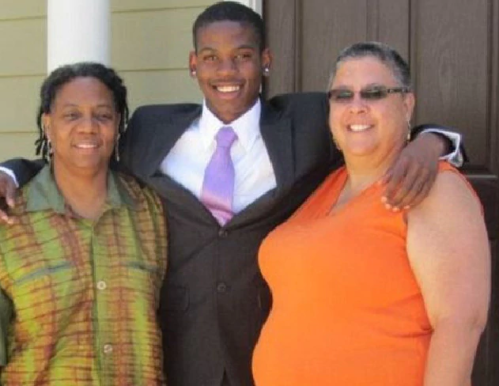 Dana Rivers (formerly known as David Chester Warfield) was arrested on November 11, 2016 and charged with three counts of murder; arson of an inhabited space; and possession of metal knuckles. When police arrived after midnight at the burning home of Patricia A. Wright and Charlotte Ku’ulei Reed, a lesbian couple, they reportedly discovered Rivers exiting the home covered in blood.

According to police, Rivers was carrying knives and ammunition while attempting to flee on Reed’s motorcycle. Reed and Wright were found murdered along with their 19-year-old son, Toto “Benny” Diambu-Wright, one of their three children. The two women, known to friends as Pat and Char, had been repeatedly stabbed and shot to death; Benny had also been fatally shot. According to Officer Hector Jimenez, Rivers “began to make spontaneous statements about her involvement in the murders” while being detained by police.

On July 5, 2017 Rivers entered a plea in response to the charges: Not Guilty on all counts. Rivers also plead to deny each instance of Special Allegations and Special Circumstances related to the case, such as multiple murders and use of a deadly weapon.

Though there has been steady courtroom activity related to the case over the past year, media coverage been extremely scarce. Some reports have stated a possible motive involving a “property dispute.” Speaking under condition of anonymity, community sources say their knowledge of Rivers’ contact with Ms. Reed could suggest different possible motives. One source commented, “A property dispute is something like, ‘I want your motorcycle.’ And there was an attempt to take Char’s bike, but it seems more like an afterthought. If it was just about the motorcycle, then none of the rest of this had to happen. It just doesn’t make sense.”

Rivers is being held without bail at Santa Rita Jail in Dublin, CA. Rivers appeared in court for a Pretrial Hearing at the Rene C. Davidson Courthouse in Oakland, CA on January 8, 2018 for a Pretrial Hearing and was then scheduled to appear for a Preliminary Hearing on January 22, 2018. Court records initially reflected that Rivers was represented by Defense Attorney Bonnie Lynn Narby. According to more recent records, Rivers has engaged an experienced criminal defense attorney–Timothy B. Rien of Rien, Adams & Cox.

Records list the District Attorney for prosecution as Christopher David Cavagnaro. During the January 8 Pretrial Hearing, Melissa Eileen Adams, Managing Partner of Rien, Adams & Cox, appeared in court to represent Rivers, and a D.A. who did not appear to be Mr. Cavagnaro appeared for the prosecution. During the proceedings, an additional Preliminary Hearing was scheduled for March 6, 2018.

On March 7, a Further Preliminary Examination was conducted; following that were another Arraignment and additional Hearings. Rivers last appeared in court on May 15, 2018 for a Disposition & Setting (D&S), and is next scheduled to appear on June 27, 2018 for another D&S.

Prior to being arrested for these crimes, Rivers had been best known as a transgender activist. Formerly a member of the Navy, Rivers had become a journalism teacher at a Sacramento area high school. After being fired for discussing personal matters related to gender transition with students, Rivers sued the school board and won a settlement. Additionally, Rivers participated in organized actions against the Michigan Womyn’s Music Festival, a predominantly lesbian cultural institution (p44).

Patricia Wright, known as Pat, was a beloved public school teacher; Charlotte Reed, often called Char, had a successful hair salon catering especially to a clientele of trans people. Both women graduated from Mills College. Benny Diambu-Wright was a Berkeley High School graduate who, according to his brother, wanted to become a nurse. Pat, Char, and Benny are survived by family, including Reed and Wright’s two other children, as well as their extended family, friends, and communities.

One response to “California: Court update on alleged murder of lesbian couple and adult child”