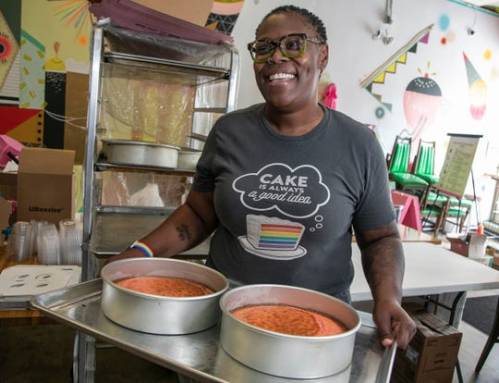 [April] Anderson, a pastry chef with a national reputation, was taken aback by a recent cake order that came into her Good Cakes and Bakes bakery on Livernois in Detroit’s Avenue of Fashion commercial corridor.

And, at least at first, she was unsure  how to handle it, worried she could wind up facing a lawsuit.

“We are so used to being Black lesbian women,” Anderson said. “You are used to people discriminating against you and saying mean things to you.”

On July 19, an online order came in for one of the bakery’s red velvet dessert cakes — an Anderson specialty.

Then Anderson read the message the customer wanted written on the cake and was stunned.

“I am ordering this cake to celebrate and have PRIDE in true Christian marriage,” the customer said in the order.  “I’d like you to write on the cake, in icing, ‘Homosexual acts are gravely evil. (Catholic Catechism 2357)'”

Anderson baked the cake, but without the requested message. In doing so, she was  following the bakery’s long-standing policy.  Written messages are not permitted on specialty dessert cakes ordered online, as stated on the bakery’s website.

Anderson and her wife also wrote a letter to Gordon and attached it to the cake, saying they stand against hate.

“We feel the only ‘grave evil’ is the judgement that good christians, like yourself, impose on folks that don’t meet their vision of what God wants them to be,” the letter said.

One response to “U.S: Lesbian baker who received homophobic cake order, made the cake anyway”