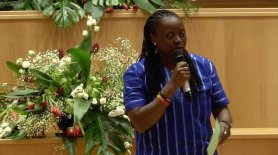 At a time when women around the world are speaking up against abuse and demanding greater gender equality, the Vatican’s actions to silence these women speakers have prompted some Catholics to reflect on whether the church really values women’s voices.
Ssenfuka Joanita Warry, a lesbian Catholic activist from Uganda, was reportedly one of the women whose presence at the conference did not meet the approval of the Vatican.
During the conference, Warry spoke about what life was like for her as a lesbian activist in a country where homosexuality is illegal. She condemned the silence of religious leaders in the face of this discrimination against queer Ugandans.