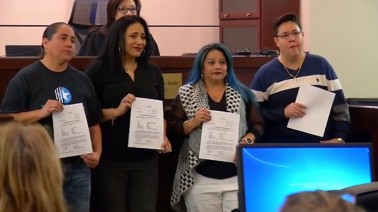 A Bexar County judge on Monday signed papers erasing the criminal histories of four women wrongly convicted in 1994 of sexually assaulting two girls, according to a News4 report.  Elizabeth Ramirez, Kristie Mayhugh, Cassandra Rivera, and Anna Vasquez — known as the “San Antonio Four” during coverage of their high-profile case — were wrongly convicted of gang-raping Ramirez’s nieces, then 7 and 9. The women had recently come out as lesbians, which prosecutors seized on as a motive.

Ultimately, they served 15 years in prison.