U.S: Two lesbians were the first “out” people to be elected to office, rather than Harvey Milk

Yes, this is a picture of the first out gay person elected to a major political office.

It is a photo of Elaine Noble, elected to the Massachusetts House of Representatives in November, 1974, three years before Milk was elected to the San Francisco Board of Supervisors, and, actually, she was the second out elected official.

The first was 21-year-old Kathy Kozachenko elected to the Ann Arbor, Michigan, City Council in April, 1974. Prior to her election, council members Nancy Wechsler and Jerry DeGrieck had come out in office and convinced the majority of the council to vote to add “sexual orientation” to Ann Arbor’s antidiscrimination ordinance. 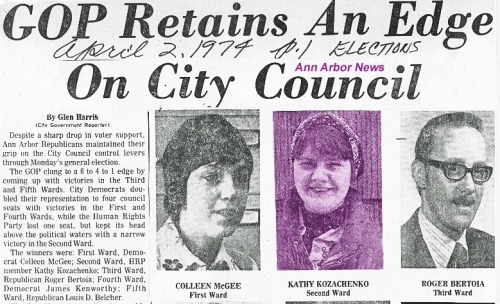 Like Loading...
This entry was posted in News and tagged Discrimination, Elaine Noble, Kathy Kozachenko, lesbian politicians, lesbians in politics, Lesbians in the U.S.. Bookmark the permalink.