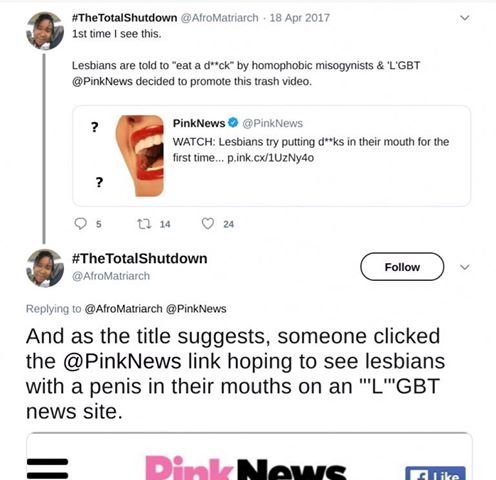 “PinkNews, a male-run publication, has a history of coming under fire with the lesbian community. Yesterday, it happened yet again…

Lesbians are the most silenced within the alphabet and within the mainstream media. We’re pathologically misrepresented.

The mainstream media (including the ‘LGBT’ mainstream) are male-dominated (like everything else)… Even lesbian organizations and media are controlled by non-lesbians and male-money—Parent companies or advertisers that ultimately control what we can and cannot say. Mainstream media is like the creepy uncle who shows up at your lesbian dinner party, uninvited, holding a bouquet of d*cks. PinkNews has been called out on social media, time and time again, for what lesbian readers view as biased reporting, anti-lesbian sentiment and misogynistic viewpoints.”

Continue reading at: Male-Run ‘Pink News’ at Odds with the Lesbian Community…Again (source)